Africa in My Soul: Memoir of a Childhood Interrupted 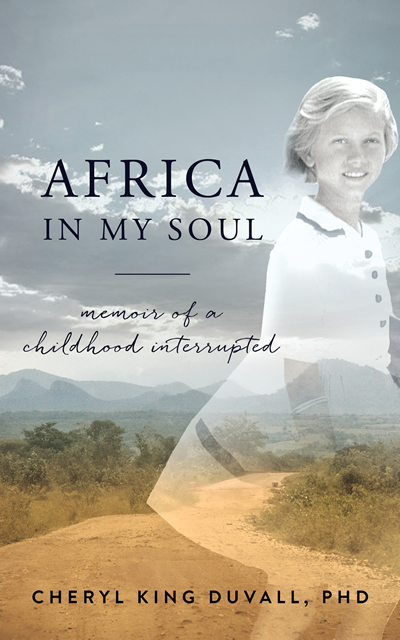 Africa in My Soul: Memoir of a Childhood Interrupted is the true story of my turbulent, and sometimes joyous, years growing up in a third-world culture. When I was eight, my family and I started preparing to go to Nigeria, West Africa. My parents were to serve as Protestant missionaries with the Sudan Interior Mission (SIM). My family included my mother and dad, my older sister named Maria, and my younger twin brother and sister named Edward and Ann.

In the book, I describe my years growing up in the boarding school from sixth grade through graduating from twelfth grade in high school. My parents were transferred many times from one station to another across Nigeria which is common practice. This left me without a real sense of “having a home.”

While in Africa, I suffered from intense loneliness and homesickness. Because no mission high school was readily available for my older sister, she had to be left behind in the states with a church family. Leaving Maria behind angered and hurt me deeply, as Maria, my sister, and I were very close; I missed her terribly.

The boarding school experience for me was very painful, and I had a hard time adjusting. While there, I suffered mental, physical, spiritual, and sexual abuse. But, I was a determined young girl and developed defense mechanisms. Although some were dysfunctional, they helped me deal with the challenges I was faced with—I describe my coping strategies in the book.

However, I had some very exciting things happen to me in Africa. I was the first white girl to visit in a remote village. While there, the village chief offered my father a goat and two pigs for my hand in marriage. I was witness to a private tribal ritual called the Fulani Tribal Beatings where young men had to endure beatings with a stick across the chest while showing no outward signs of pain in order to become a man and get married.

To me, Africa was a land of magic. I dearly love Africa, and everything about it. The African people are warm and kind; the friendliest people you will meet. And I have been back to my “home-away-from-home” twice since I left it in 1967. Africa is always fresh on my mind and deep in my heart.